How can brick slips solve problems for you?

As well as just being a delightful addition to your design project, brick slips solve problems!
Brick slips are a designers ultimate tool, often used by large construction companies and on major installation projects as the go too product for solving a whole host of practical design problems.
Here are just a few ways in which brick slips can help solve problems for your project.

Brick slips are the go to product where external or internal brickwork has crumbled away.
In the majority of cases it is possible to cut the badly affected areas away using a grinder or mortar rake and replace the damaged brick work using brick slips.
This method of repair is the building industries equivalent of “plastic surgery”.
Brick slips are the perfect product for when the occasional brick has had a blown face.

Repairing a blown face or crumbling brick requires fixing the brick slips to the affected area using a rapid set adhesive that can be used with masonry.
Finishing touches can be made by pointing up with a mortar pointing gun and using our easy to mix historic mortar. Once installed and weathered the repair will become un-noticeable.
Due to the extensive range that brickbrickslips.co.uk offer and there is almost certainly going to be a rough match especially if repairing old English brickwork. Where planning is very strict and building works are under scrutiny, dummy chimneys have become fairly popular in rural settings over the last few years.
Using our brick slips, they allow the property to still retain the “street view” and “skyline” view criteria that is often imposed by planning councils.
Perfect in instances where a traditional chimney is not feasible. Timber based and cladded with brick slips these chimneys are indistinguishable from the real thing. The use of brick slip corners is highly advisable when building a dummy chimney as they add a 100% believable look.

We live in a world of expensive space, premium space.
By living in cities like London, Paris and new York, paying a substantial premium for the location is something that is accepted.
Unfortunately getting a third of the space for your money than you would ordinarily get in any other town or city is a common side affect.
Where space is at a premium, brick slips allow you to add a feature wall internally at a quarter of the space required when building an actual brick wall.
Coupled with the disruption and logistics of building an actual brick wall verses installing our brick slip tiles, the choice is simple. 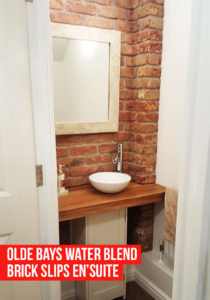 Buildings, rooms, shops, fireplaces, windows etc have all got a certain proportion of architectural detailing. Brick slips are a fantastic product that help to solve the problems that reveals corners and details can cause.

The brick slips provide an attractive realistic finish to corners and reveals and due to the thickness enable the installer to work within tight hard to reach areas live window reveals and fireplaces.
Sometimes its easy to pre fabricate hard to install components using pre-assembled components like timber framed ply moulds that are then faced with brick slips which can be fastened at a later time. In a similar way arches and faux pillars can be constructed pre installation and clad before putting in situe.