Back to Case Studies

Our reclaimed brick slips have added a professional touch to the office suite of a company that leads the world in professional networking.

Linkedin as a Company

LinkedIn is an internet anchor company that operates the world’s largest and most successful professional networks on the Internet with a membership of more than 467 million members in just over 200 countries.

Being one of the world’s largest and most powerful network of professionals means that looking good is not just about looking good.

The company decided to implement a grand and bold design for their new London based Headquarters. 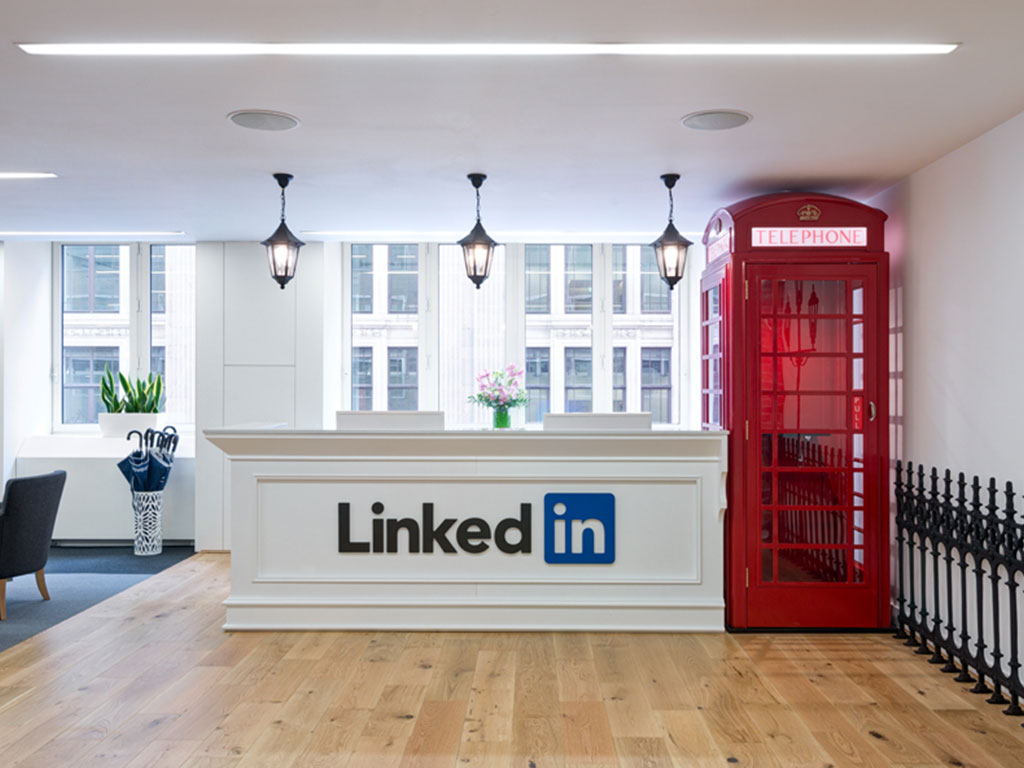 Its common knowledge in the design community that the working office of the future is not about de compartmenting or technology as much as it is about ease of transporting ideas.

LinkedIn design process was to have a striking office plan with a core focus on employees engaging.

By engaging with each other and with clients the design had to project an open environment that nurtured creativity.

Our reclaimed brick slips were an integral and calculated part of the design brief.

The designers had allowed for space and crisp decor to be the focal point whilst utilizing the reclaimed brick tiles as part of a magical transformative backdrop to the design. 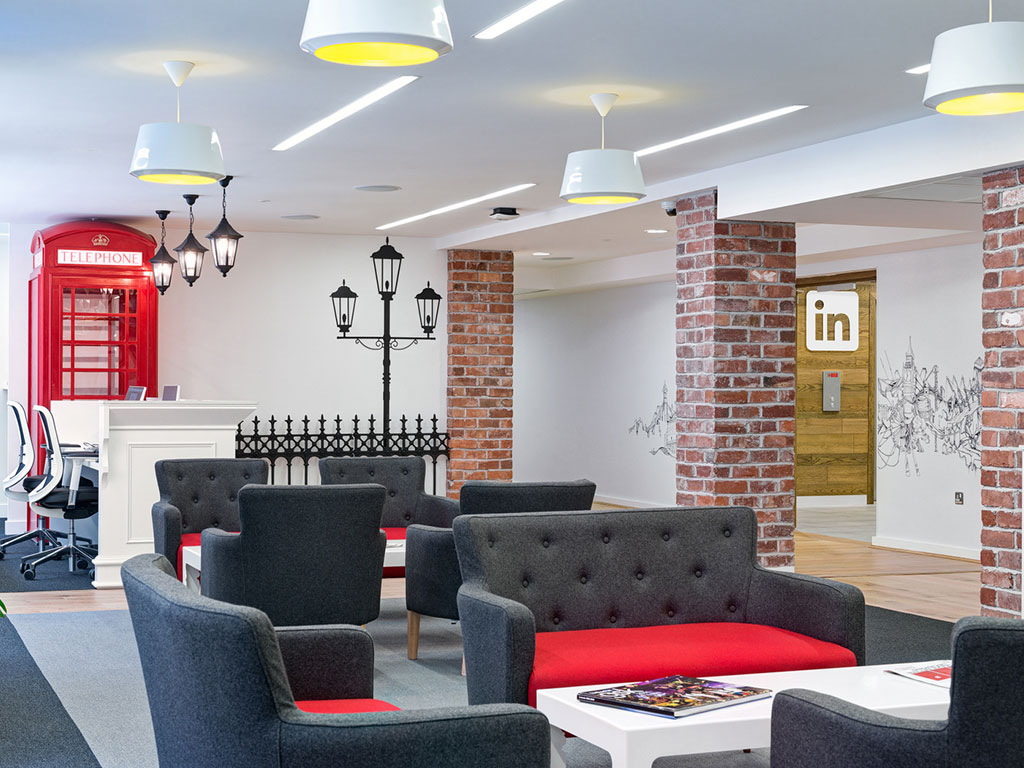 The design of this amazing facility is one of inspiration, intelligence, comedic value and ultimately one to promote productivity within its ranks.

A main design feature in relation to brickslips.co.uk products was to use the reclaimed brick tiles authentically.

The space of this impressive office suit needed opening up.

Large pillars were created throughout to give the feeing of history, the pillars were clad with both slips and corner slips, simple cladding systems of just slips and corners offer the best way of creating the illusion of a structure that has been around for some time without all the mess of building a full brick wall or pillar.

The pillars draw you into the designers mind like no other structure within the office.

Breaking the space and creating a skeletal back bone that strikes through the office space. 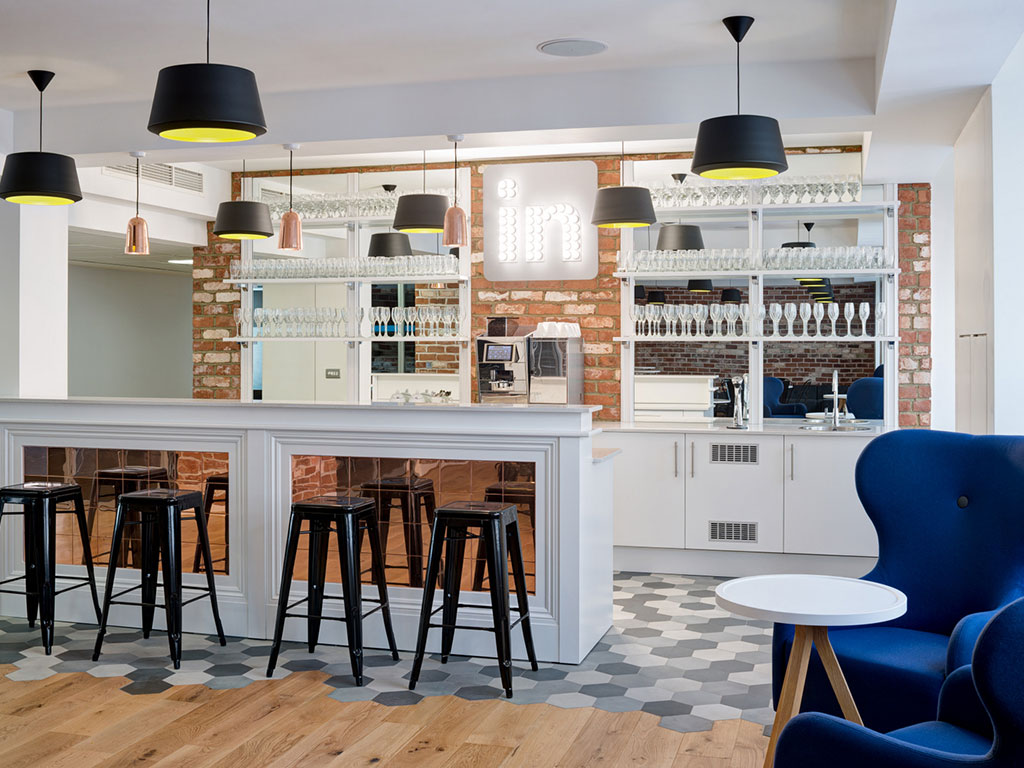 The creating of casual meeting room where employees could discuss business on a personal level was one of the main corner stones of this installation.

The room was designed to be fun and functional, light and spacious, the furniture sits against a stunning back drop of our reclaimed brick slips.

The mixed reclaimed colours and tones fitting for the illusion of the hustle and bustle of working London.

LinkedIn wanted an office that frowned at the old fashioned style of incubation and championed an office cross pollination and an area of open transparency.

Modern and stylish the use of white against the red brick really does get the blood flowing.

The strict surgical theme of London, Greater London ripples through the offices and is backed up at every corner by the fantastic reclaimed brick tiles that are tastefully positioned in all the right areas.

The design is sleek, stylish and modern and gives you a great insight into the rationale and goals that were envisioned upon concept.

Interior brick cladding is one aspect of this design that really does glow with excellence. In product and in installation.

The use of reclaimed brick slips was executed with a great understanding for the product and what the product is about. Too often do we see the tiles just merely glued to the wall without thought or care for the reasons why…

Using a product that was quite possibly cut from bricks that were fired at the same time Big Ben was being erected really does shed light on the dedication to quality and excellence that LinkedIn and know for.

The installation has been finished traditionally using our historic light grey pointing mortar. The use of a mortar pointing gun during this aspect of installation will have been of great value and saved the client time and money for labor. 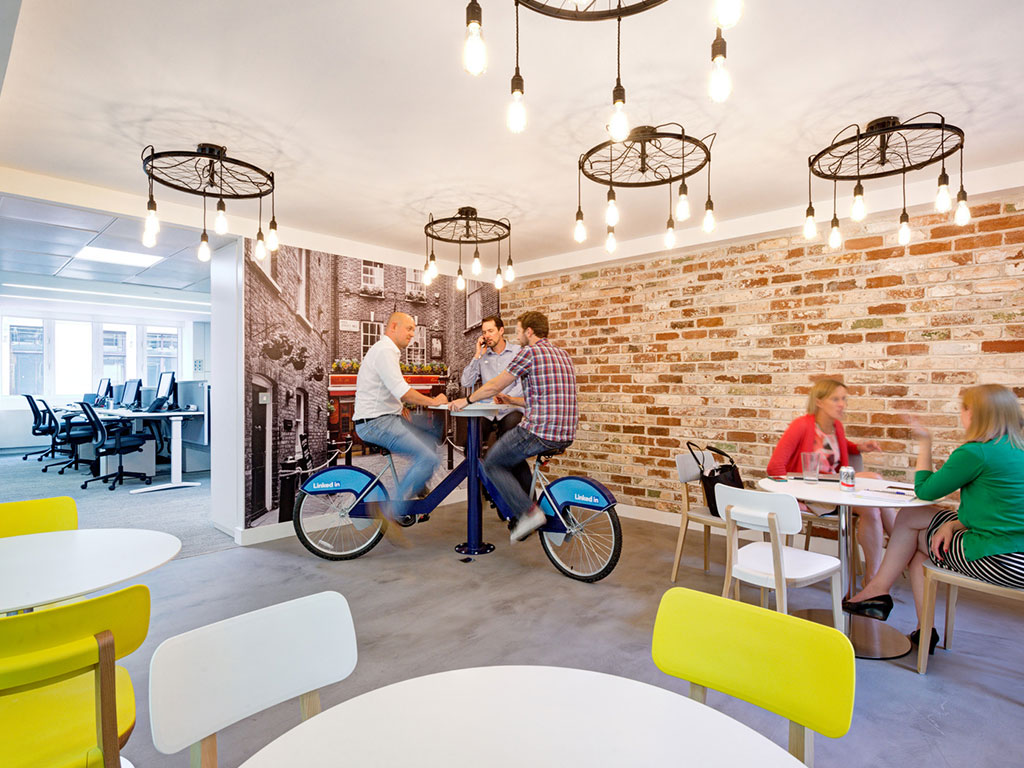 Office design doesn’t get much better than this.

The spirit and social aspect of professional business flows through this expertly crafted hub.

More structured than the famous offices of Facebook, Google and Yahoo but still retaining the social influences of their fun inspiring think tanks.

The decision to use reclaimed brick slips on this project has only compounded the London influence, you can imagine those walls as being a deep routed part of the history of the business.

This case study is evidence that real reclaimed brick slips boast a surreal realism when coupled with features such as giant images of London’s big Ben and the famous London red bus.

As quintessentially British as the K6 Phone box which graces the reception area, LinkedIn’s use of our reclaimed brick slips has ensured that this recycled British building product has received a new lease of life within its grand new surroundings.

(Larger images are available to the right side of this page) 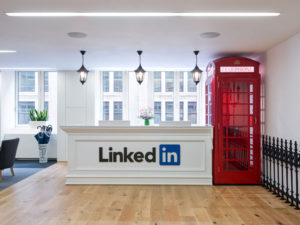 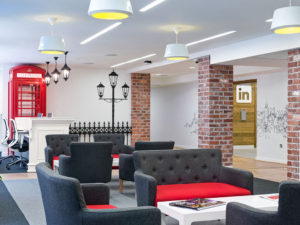 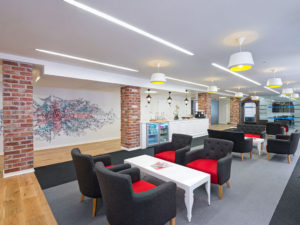 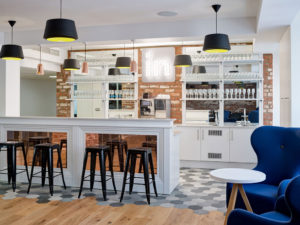 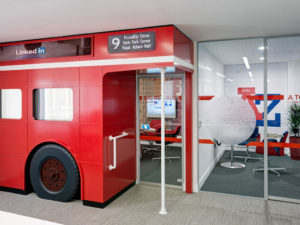 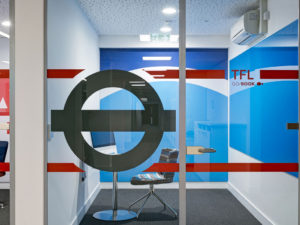 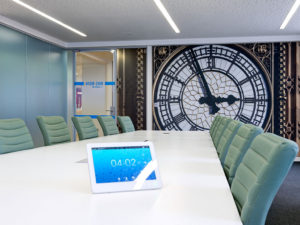 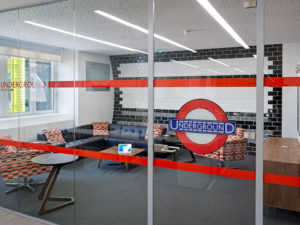 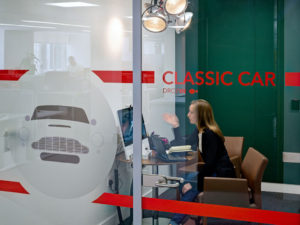 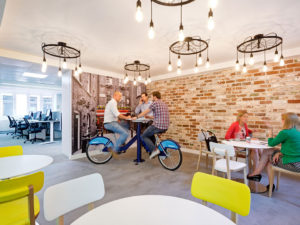 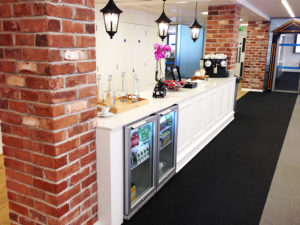 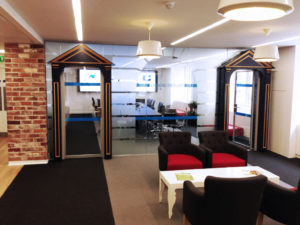 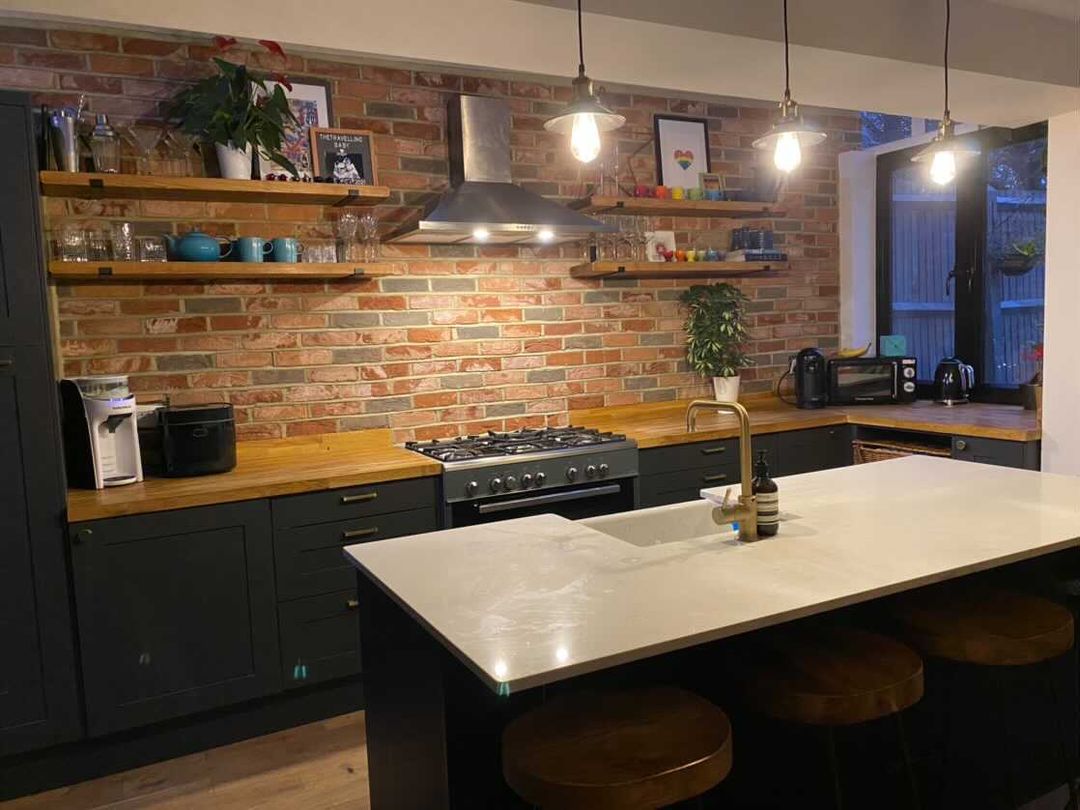 Travel with us! We love what @thetravellinggays have done with the revamp of their city pad! Firstly, meet two dads, whose love for their family and travelling adventures have inspired us all. In between... 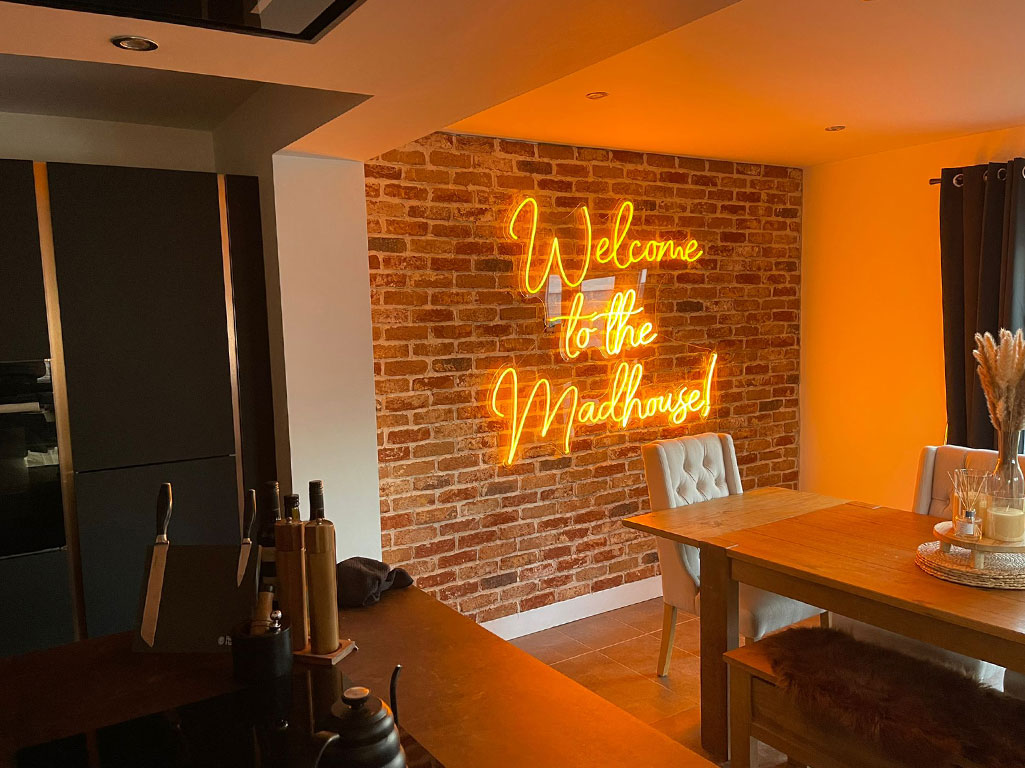 The kitchen is the heart of any home.  A recent installation of our Olde Bayswater range in this residential kitchen in Doncaster showcases these brick slips to their true potential. It combines a wonderfully...

This London based project was undertaken by online design influencer Suszi Saunders.  Suszi’s Vegan interior design and lifestyle blog on Instagram attracts a massive 50k followers and has showcased some amazing interiors and ideas....

Kitchens are often the busiest and most utilised rooms within the family home. It can be difficult to create a kitchen that is both functional and looks amazing. This is one kitchen that has...

Here we have a great case study which shines a wonderful light on our Manhattan Brick Slips. Sticky Paws is a highly successful indoor venue in Northwich which is all about family, food &...

Some times we get projects that come along that really do wow us! This amazing luxury home has really notched the design bar to the next level! Externally this spacious private residence has a... 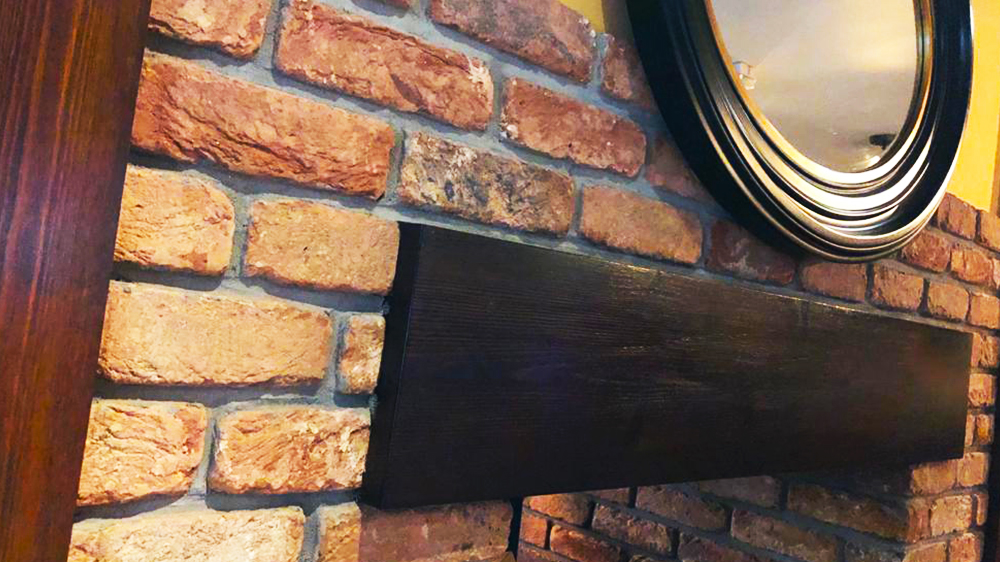 Our Olde Bayswater  blend brick slips look firmly at home in this quaint beautiful village pub. Run by a local family, they have built up an exceptional reputation for serving quality pub grub within...

Our Olde Bayswater brick slips have helped transformed this classic British Pub. This case study finds us dipping our toes into the all important British pub. Our typically British looking and equally British Olde...

If you were to close your eyes and think of the quintessential British pub you wouldn’t be on your own thinking of.  Large open fireplaces, timber furniture, traditional style bar area. Walls with plenty...

All image rights property of their respectful owners. The brick slips featured within this case study are all products which have been manufactured and supplied by our company.